So What Does This Little Roll of Foam Do For Your Home? 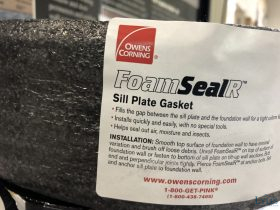 It was a sunny fall day in Castlewoods several years ago when Gary and Wayne Lyles sat on Gary’s back porch sipping on a cold sweet beverage. Wayne was espousing his newest discovery in Excel while Gary sat reminiscing about a tournament from his professional bowling days.

Wayne’s comments went like “Yeah, we could use an if-then statement to shore up the sum of the estimate while a goal seeker algorithm hones in on the final result. It’s brilliant!”

Gary was looking intently at Wayne but his thoughts were on the past. “Seven ten split. How the heck did I leave a seven ten split with only three frames to go? If only I could have picked up the spare I’d still be a pro.”

After a few moments of silence while each smiled to themselves in their own worlds, the guilt of yardwork to be done would bring Gary back to the present. He had been putting it off for weeks too busy building finely designed homes. He began blowing the leaves off of his porch as Wayne pondered about designing an Excel sheet to keep Gary on schedule with his yard work.

Once the yard work was done, of course they both needed another beverage.

So Gary walked into his house to his Whirlpool 24.7 cu ft 3 door refrigerator to retrieve two cold bottles of goodness. On his way back, he saw debris inside by one of his exterior walls. Then he saw that it was in several places along the wall and now, reliving the past with presence of mind, realized it had come from under his walls while he was blowing the porch off. While Gary’s home was built by another builder, he thought to himself, “Wait a minute. I’m now a dang homebuilder. This shouldn’t be happening!” And that was the beginning of a solution that would reshape the way the Lyles brothers framed homes from then on.